Vanquish Guitars in Peterborough is masterminded by Adrian Hardman, the designer and builder of all Vanquish instruments.
I have been following the build of a signature, custom spec of the Classic model of Adrian’s guitars.  This week Adrian was joining the neck to the body. As with every aspect of his work, Adrian was extremely careful and precise during this process to ensure the join between the neck and body was perfection.

Adrian began by spreading water across the back of the neck and the neck pocket. This is something he learned years ago and is an ingenious method for its simplicity. The water expands the fibres in the wood so that the neck and body ‘mould’ together.

Immediately after Adrian dabbed water onto the wood, he clamped the neck and body together, with blocks of wood in between the guitar and the clamps to protect the guitar. He left the wood clamped for a few minutes to allow the fibres to expand.

Adrian dabbed more water to the join. Using a soldering iron he applied heat to the join which further expanded the wood fibres. I was amazed, once again, by the incredible attention to detail in Adrian’s work. He works until absolutely sure his work is of the best quality, and that is why Vanquish Guitars is of such acclaim. 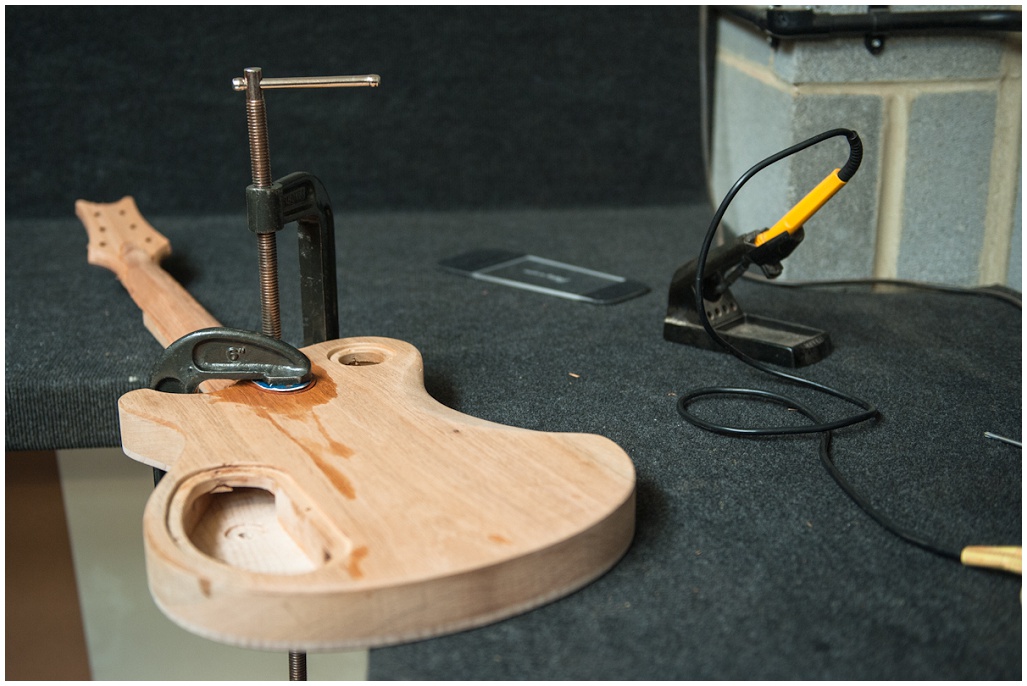 Adrian next revealed an extraordinary piece of equpiment, a truss rod. The truss rod is placed in the recess on the fingerboard and adjusted near the headstock. This was Adrian’s last opportunity to drill a channel for the wiring of the pickups. This is because the only available point of access to drill this channel is through the neck joint. 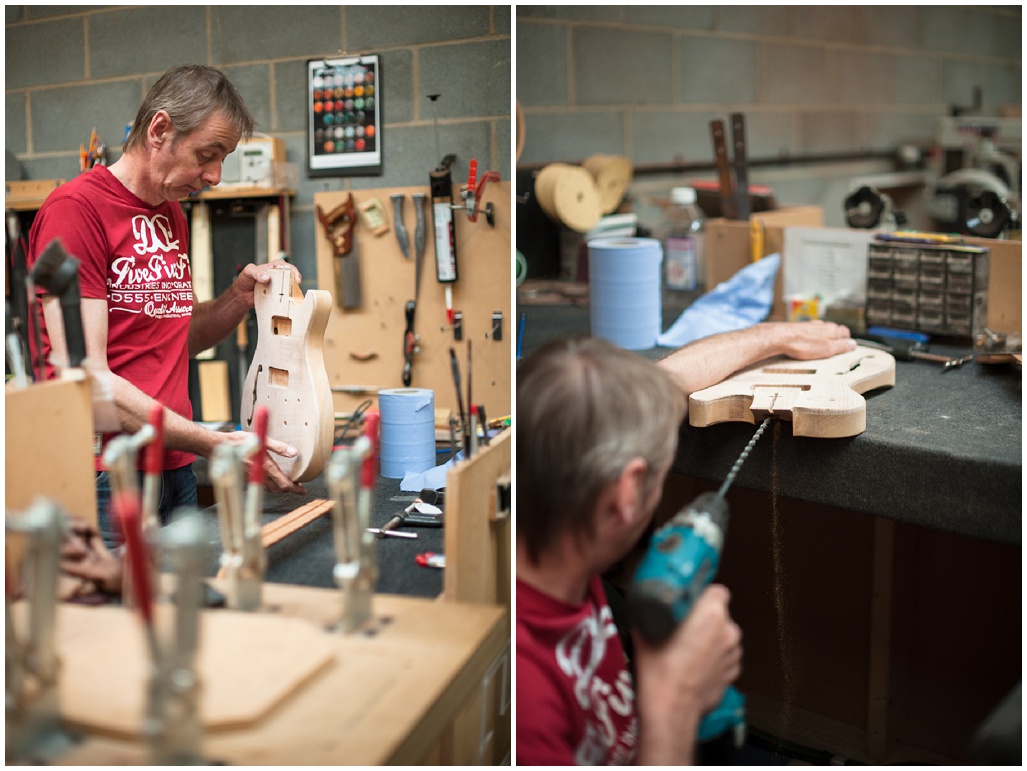 He then used a small chisel to remove the remaining pieces of wood to create a perfect channel for the wiring. 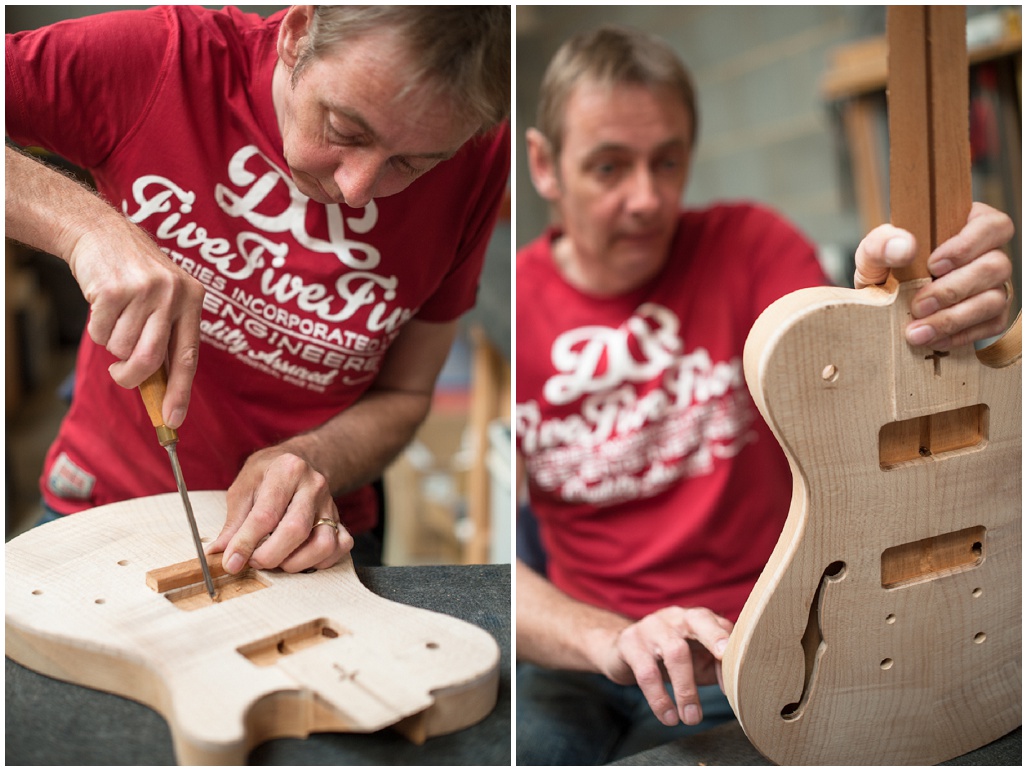 GLUING THE NECK TO THE BODY –

Gluing the neck to the body is one of the pivotal stages of the guitar build. Adrian had expanded the wood earlier in the day by dabbing water onto the back of the neck and the neck pocket and clamping the pieces together while applying heat so the wood fibres expanded.

Adrian followed a similar process, this  time very carefully covering the join with wood glue so that the join is completely covered but not overloaded.

Adrian then clamped the neck and body together for the final time, again using wood blocks to protect the instrument from the tightening clamps. He tightened the truss rod which primarily sets the relief (bowing) of the neck. Adrian also uses this to pull the neck and body together, and then removed the small amounts of excess glue that appeared due to the pressure of the clamp and truss rod. 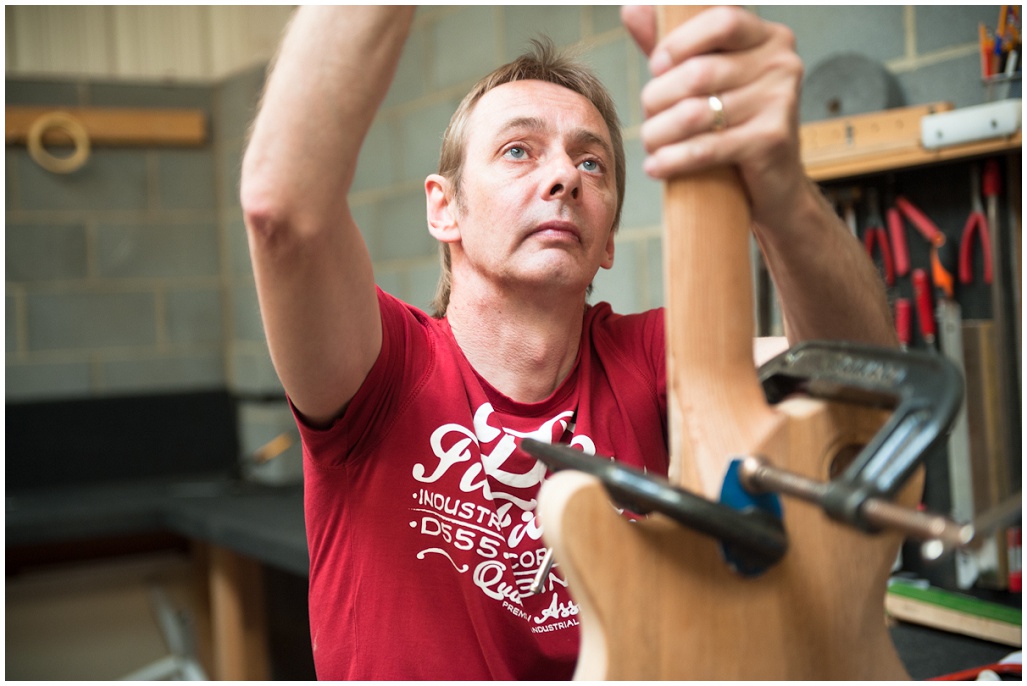 Adrian used a hammer to press the edges of the join down, another method for achieving a seamless join.

Tom is Adrian’s highly skilled and trusted assistant, and the friendly face that welcomes you into the adjoining shop, The Guitar Lounge. He also has an order placed for one of Adrian’s other models, the ‘Alchemy’ Vanquish guitar which is almost finished.

Tom has chosen a beautiful blue colour and when Adrian covered the guitar with a final coat of oil the colour it transformed into something almost luminescent. I look forward to seeing Tom’s guitar when it is finished!

For any more information about Vanquish Guitars or The Guitar Lounge, visit www.vanquishsounds.co.uk or www.theguitarlounge.co.uk.