Last week I revisited master luthier Adrian Hardman at his workshop in Peterborough, to see him hand-make the next stage of a custom, signature guitar he is working on. Not long ago Adrian invited me to watch how he hand builds his instruments at Vanquish Guitars, alongside The Guitar Lounge in Peterborough.

The specification for the neck of this custom, signature Vanquish Classic guitar is:

Last time I saw Adrian, he was machining the shape of the mahogany and maple hollow body, and the neck pocket and f-hole were cut out. This week Adrian had moved on to working on the neck, and began with a block of mahogany which was secured with pegs to the CNC machine, between two other blocks of wood to ensure there was no movement while the tool cut into the wood.

To begin, Tom, Adrian’s trusted assistant,  hammered in the metal pegs that hold the wooden block of the back in place on the CNC. He then changed the tool to begin to cut the profile of the back of the neck. This will be the side of the neck that is exposed to the players hands.

Tom changed the tool to begin to cut out the radius of the back of the neck. This will be the side of the neck that is exposed. 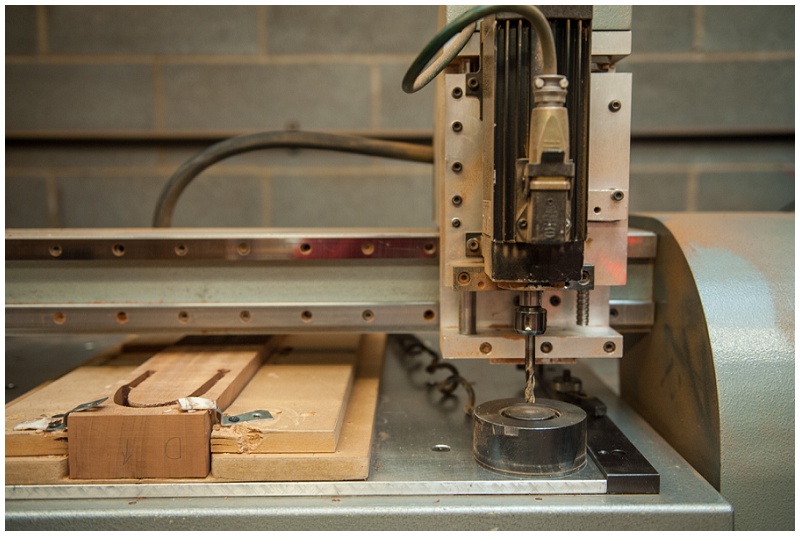 As when machining the body, the CNC tests the depth of the tool to ensure absolute precision when cutting the neck. Adrian uses the CNC machine as it ensures uniformity, and is the most accurate process to cut the body, neck and headstock of his guitars.

Using CAD/CAM the CNC initially cut down to depth. The top layer of wood was machined until the correct depth for the neck’s profile was reached.

It’s incredible how rapidly the sawdust accumulates as the tool cuts so effectively. Within minutes the mahogany is transformed and the shape of the neck begins to show through. Adrian and Tom hoover up the sawdust to reveal the masterpiece beneath. 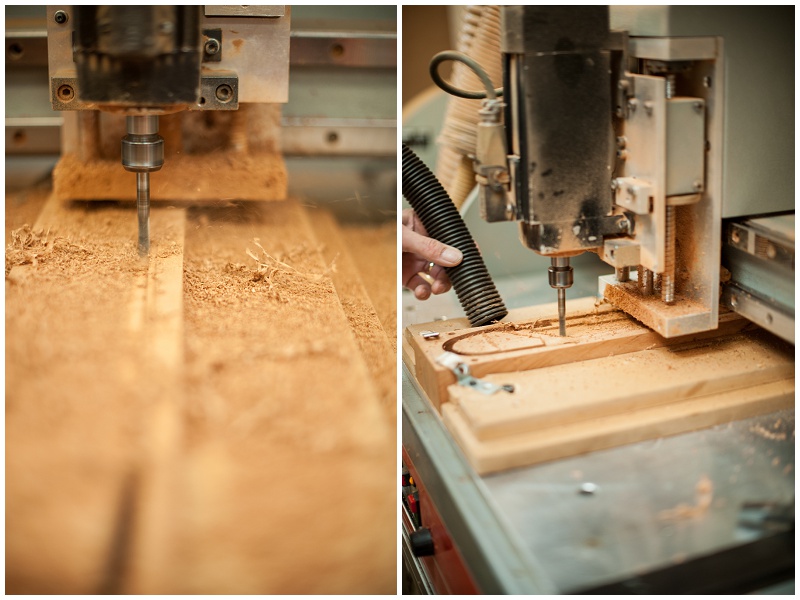 The CNC cuts to depth and removes layers of mahogany with a coarser gradient in CAD. As the tool cuts deeper, the heel of the neck becomes increasingly prominent.

As you can see in these pictures, the CAD program starts each new pass of the tool beginning in the centre of the neck, and progressively cuts towards the edges. Once the tool reaches the heel of the neck it cuts at an angle, which will later be smoothed into a curve by a finer gradient at the point at which the neck meets the body.

Adrian had machined the neck joint already, which is why beneath the heel of the neck is already hollow. He has developed his own neck pocket which gives the optimum join between the body and neck when he comes to gluing the two together. 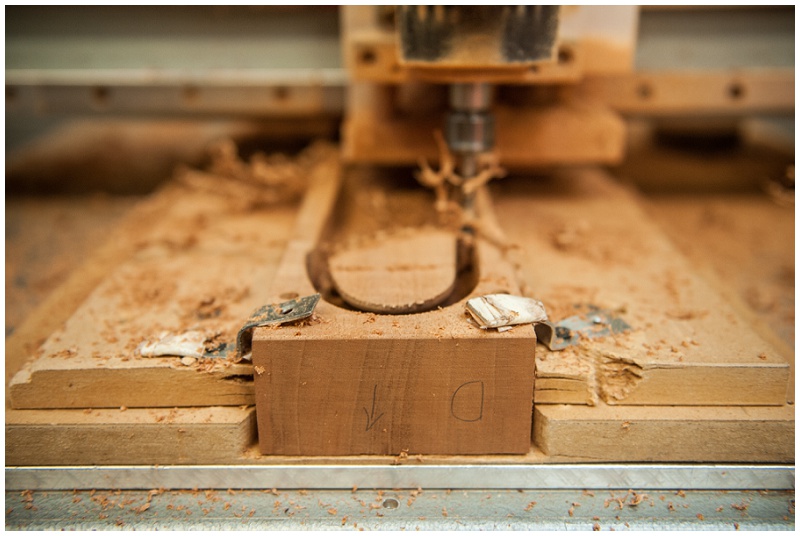 The top of the neck is also machined in such a way that will make the join between the neck and headstock absolutely precise.

At this point, the CNC has cut down to depth, and it is now cutting the 3D profile of the neck. 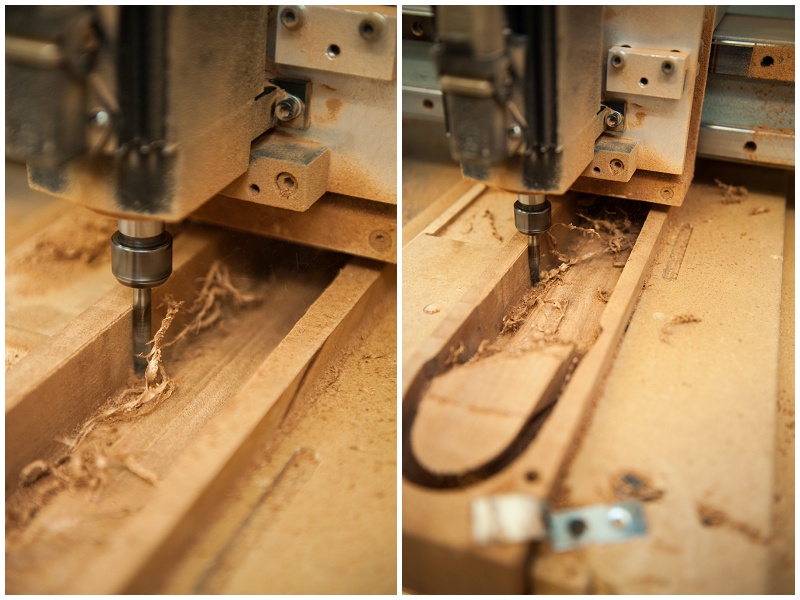 Now, Adrian had moved on to working on another guitar in his workshop while the CNC was running. He was doing the final preparations before sending the guitar to be painted. Adrian used an electric sander on the body of this Classic model, so that the finish is as smooth as silk. He then stained the guitar black.

This guitar will have a painted neck which will be sanded back later to the client’s taste. This finish will look worn in and give a more natural, tactile feel to the wood, not like a high gloss painted neck.

By now a coarse gradient of the neck profile had been cut. The picture (below right), shows one of Adrian’s own, original and striking design details for the back of the neck, at the point that the neck and headstock meet. 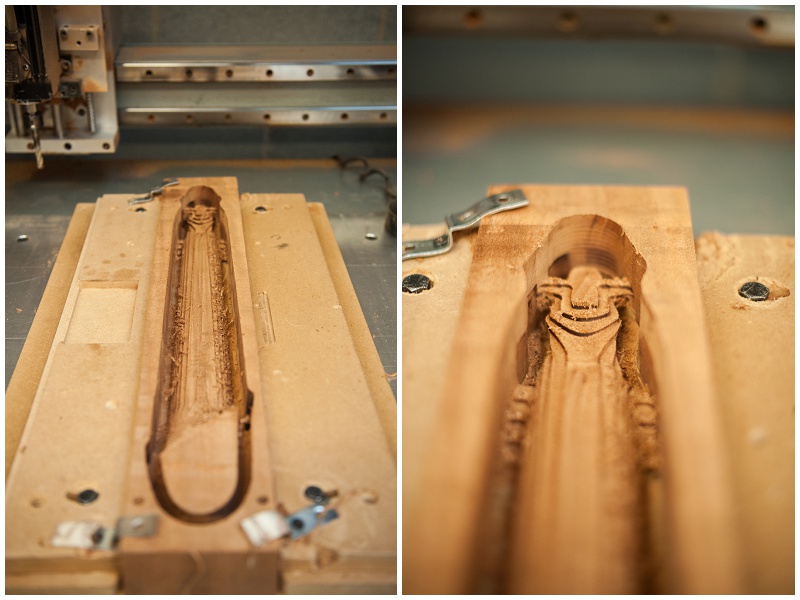 Whilst the CNC machines the neck profile, Adrian continues working on his many other guitar orders. With a razor blade and solution, he removed the glue that was used to secure the fret wire to the fretboard. 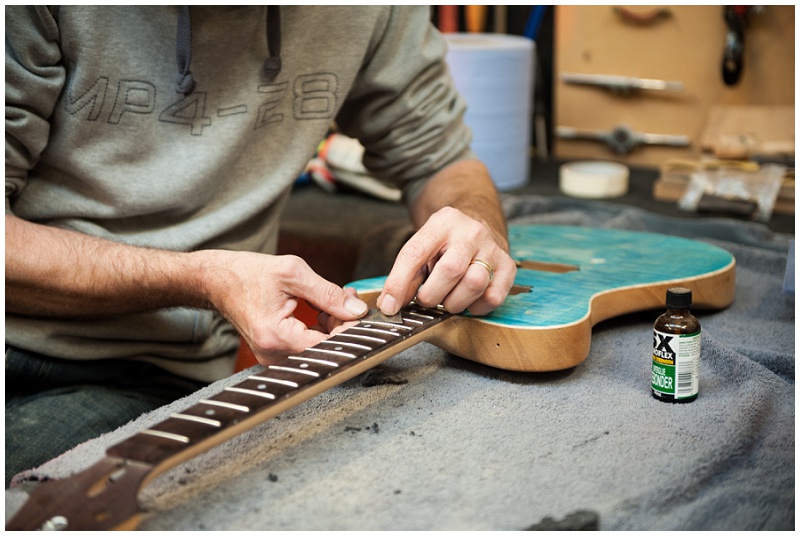 This shows the radius of the heel of the neck, and how the CNC has cut down in gradients. Now, whilst Adrian is working on one of his other projects, another CAD program is used to go back over the neck with a finer gradient to create a smoother finish that Adrian will later work on by hand. 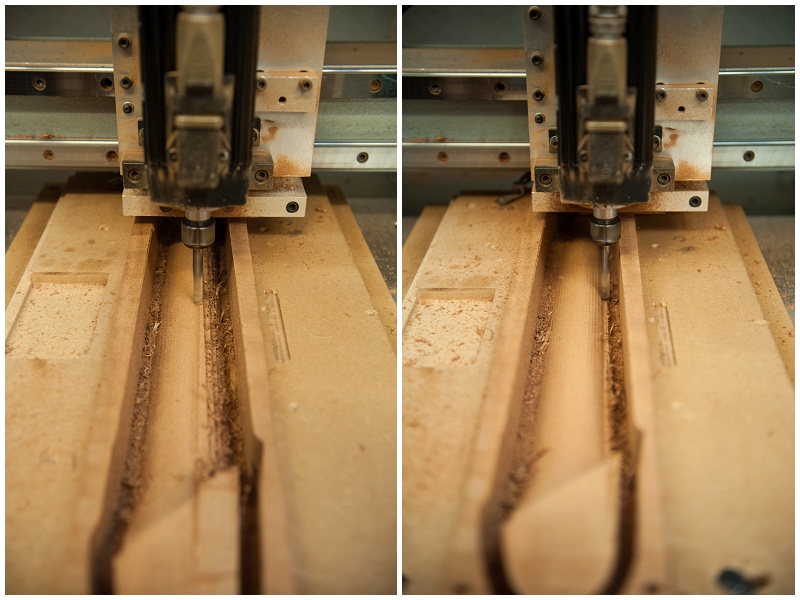 In the pictures below, you can see the fully machined and finished neck beside a block which has machined the front of the neck, showing the channel for the truss rod and neck joint  (below left). There is also the comparison between the finished back of the neck and another neck ready to be machined (below right).

Once the neck was fully machined, (the profile had been cut and the gradient between passes had been reduced), Adrian was left with a wafer thing layer of wood joining the neck to the block, which kept it from moving during the machining process. Adrian removed the mahogany block from the CNC, and with a small hacksaw, he cut the neck out from the block. Later, he would use a file to smooth the edges.

The headstock had been machined and was removed from its block with a small hand saw. He then sanded it on a bobbin sander, to remove any excess wood left behind from the block.

Adrian then filed both the neck and the headstock to create a perfect fit. Using the rounded file he filed down the wafer thin bits of wood that had connected the neck to the rest of the block.

Next, Adrian did something I had never seen; he fit the neck and the headstock together, poured water on the join and steamed the water. This expands the wood fibres to make an impeccable fit between neck and headstock. He then clamped the the join to allow the wood to mould to the shape of the joint.

Adrian left the neck and headstock in the clamps for some time. He then release the two pieces from the clamps, covered the join with glue, removed any excess glue then clamped the wood again and left to set. I am really looking forward to seeing the completed neck once it has dried. It already looks stunning, the craftsmanship is incredible.

To end the day, Adrian turned his attention back to the blue-stained Classic guitar. Adrian sanded the top again, using a small block wrapped in extremely fine grade sand paper, as the final preparation before staining the guitar. This sanding highlighted to Adrian any areas of the body that needed more attention before proceeding. 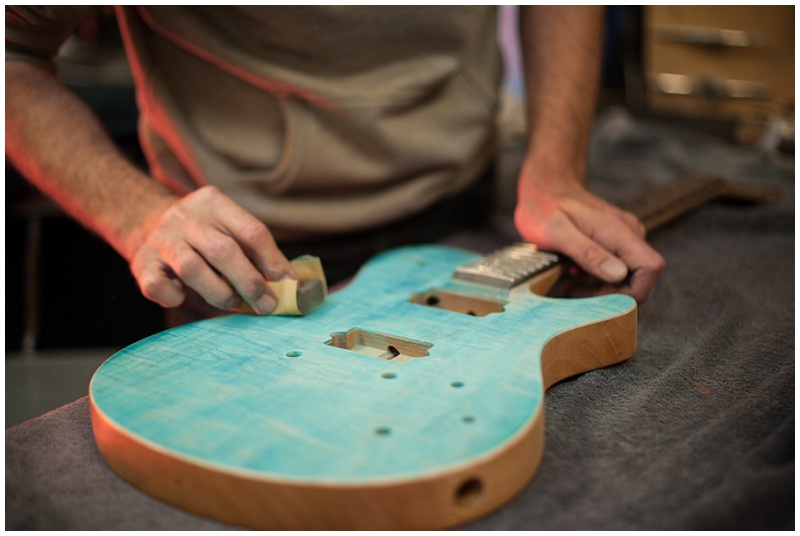 A second stain was applied in Vanquish’s stunning turquoise blue. Once dry, it will be sent off for laquer. To finish, Adrian went over the surface with very fine wire wool, once again removing any excess stain and leaving it ready to be laquered. 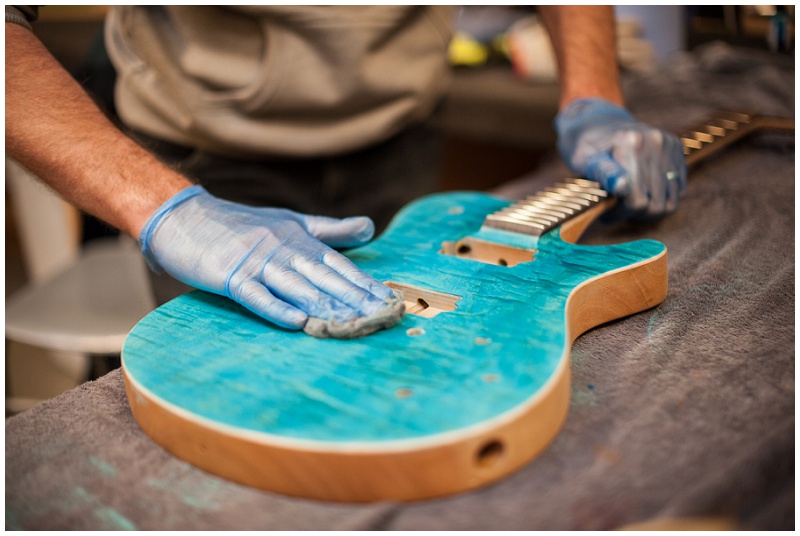 The main body of the Vanquish signature, custom Classic model is almost finished. I am very much looking forward to going back to Adrian’s Vanquish workshop, to watch how he joins the neck to the body.

For more details on the award-winning Vanquish Guitars, visit www.vanquishsounds.com.